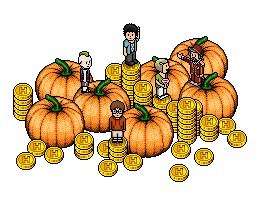 Pumpkins were a currency that were introduced on the 11th of October 2012 as part of the Habboween campaign. Along with the new currency, a new set of furni was introduced. To gain Pumpkins you had to buy credits and every credit was worth 5 Pumpkins. The pumpkins were used to buy new effects that were released along with the new furni range and some furni from the range itself. However, the Pumpkin currency was not re-released for Halloween 2013.

Each effect lasted for 30 days each, starting from the second it was first activated. The following were effects and furni that could be bought, along with the price they could be bought for.