Clouds were a currency that were introduced on 7 September, 2012 as part of the Clouds promotion. The promotion brought 4 new furniture items into the hotel that could only be bought with the Clouds currency, the re-release of furniture from various ranges and a new White Pigeon pet. The re-released furniture were from the (Vanilla) Executive, Area, Iced, Pura and Mode ranges and, to fit the theme, they were all re-coloured to white.

The promotion ended on 12 September, 2012. However, despite the fact that the promotion had ended, Clouds were still able to be used until 16 September; after that time, all remaining Clouds were removed.

When credits were bought, players also received the same number of Clouds. The following were the prices during the promotion. 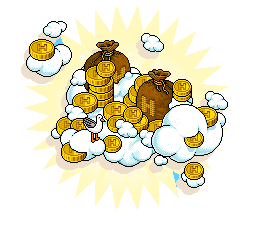 During the promotion, four new furniture was released and could only be bought with the Clouds currency. In addition to this, a limited edition Rain Cloud effect was added to the catalogue costing 1 credit. The furniture were:

On the 14 September 2012, after the promotion had ended, a new Limited Edition Rare was released in the hotel; the Cloud Throne for a cost of 300 Credits. The following day, the Pearl Dragon Egg (which itself sits upon a "cloud" by design) was also released for the price of 150 credits. All available stocks of both LTDs sold out extremely quickly. These are not technically Cloud items as they were purchased with Credits, but the continuing theme is obvious.