The Doric Olive Green Pillar is know as a 'Super Rare', due to it's lack of visibility within the hotels, which first made an appearance in April 2008. The Pillar came into existence in Habbo.com through the "Cheetah Girl" competition held in the Australian hotel in April 2008. It is one of only 4 Ultra Pillar types (Doric Graphite Pillar, Doric Blue Pillar and Doric Rock being the others).

Before the Habbo Merge, there was only one example of this pillar on the Habbo.co.uk hotel, known as the 'Pagan Pillar' and thought to be originally owned by MOD-Noct. It later came into circulation around 2009 when it appeared in the marketplace, and in the rare trade forums of the HabboxForum thereafter. 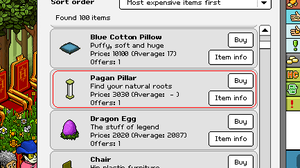 The Pagan Pillar spotted in the Habbo UK marketplace in 2009.

The Doric Olive Green Pillar has been seen on 6 hotels in total, but only released on 3. Here is a list of all the sightings/releases:

Here are confirmed owners and known examples of the Doric Olive Green Pillar on Habbo.com.