The Blue Sleeping Bag, formerly known as the "Safety Sleeping Bag" on Habbo UK, is a Rare on Habbo.com which was uploaded amongst other V7 Rares. It is only available on 3 hotels (including Habbo.com) and has never been sold in a catalogue. It entered circulation on the English speaking hotel due to it being handed out to the eXperts still remaining when the programme ended in late 2008 - about 70 or so were handed out in a gift which said "A thank you from X Management." It was also handed out on the US hotel to "loyal members" alongside other blue furniture items, although it is not known how loyalty was judged. The Blue Sleeping Bag has also been released on Habbo.no and Habbo.se

The Blue Sleeping Bag has been spotted on 6 hotels in total. Here is a complete list of all sightings/releases: 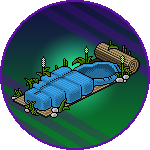 Every user who purchased the Blue Sleeping Bag as Classical Rare after 2010 also received a badge.