Pilots of the Revolution

Pilots of the Revolution, also known as UserVoice or POTR, was made in August 2010. It was created as a way for the community of Habbo to relay bugs and glitches, and also to submit new ideas to Sulake. Yurre set this up, following her successful implementation of The Research Lab.

Over the years, The UserVoice system has been drastically altered. It started as a seasonal event, but was changed to an all-year event, which included the addition of buttons on Home Pages. The 'Report a bug page' and 'Submit an Idea page' can be found by clicking the buttons at the top of the browser once a player is logged in.

All Habbos now have access to the UserVoice forums, but when they were first implemented, only a select few Habbos (those that had found and joined the UserVoice Group could see it. Within the forum, users can post their own ideas and sort them into categories, and can vote for ideas to. All users are given 50 votes, and can vote for each idea using 1, 2 or 3 of their votes. The most popular ideas then receive a comment from Sulake Staff, responding with Planned, Declined or Under Review. 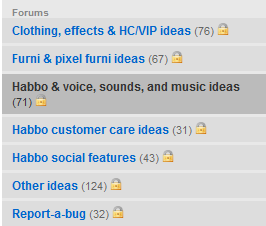 If an idea is implemented, it is always released on a per-hotel basis. The pilot (first) hotel changes, depending on market demand. For example, The Great Unmute was piloted on the Finnish hotel. Currently, the German and Spanish Hotels are testing the Habbo Helpers programme before the English-speaking Hotel receives it, similar to how they received KickWars Galactica before.

Previously, the Pilot hotel has stayed the same - firstly, the Finnish Hotel and more recently, the English-speaking. However, Paul LaFontaine recently confirmed on Twitter in June 2012 that there is no single pilot hotel any more.