The Dragon Throne Rare is a rare furniture item that was released in May of 2011, coinciding with the Drago campaign[1].

Unlike many other rares, the Dragon Throne Rare was on sale to buy for a combination of Credits and Pixels. Many players believed that the price tag originally was too much for what the item was - a chair. It went on sale in the catalogue for 75 Credits and 2000 Pixels. Over the years, the Dragon Throne Rare has increased in price as it has increased in rarity and demand for Halloween, Gothic and Fantasy themed rooms.

Every user who purchased the Dragon Throne Rare also received a badge.

Luckily, if a player hovered over the boxes in the trade it would come up that a V Guitar was in the trade and not the Dragon Throne Rare.

With players contacting Habbo, some were given the Dragon Throne Rare they were scammed back, and it came about due to the two items having the same identity number for the furni. 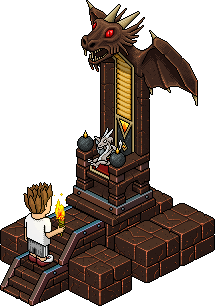 In October and November 2011, Habbo released a quest for players to complete in order to win a Dragon Throne Rare. Participants had to make it to the end of the quest collecting all the letters throughout - if they were successful they received the Habboween badge and the mysterious Headless Horseman effect that lasted them 2 months.

An error occurred with the original badge therefore a new one had to be created for the prize which meant a delay in receiving it.

After the quest players found that the Bartleby's true name was indeed BARTLEBY. 25 entrants were randomly chosen and they won the badge alongside the effect and the Dragon Throne Rare.