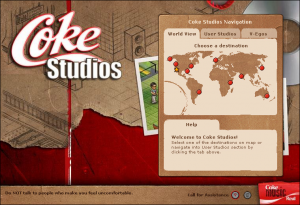 MyCoke originally called Coke Music, or Coke Studios, was a campaign for Sulake at the start of 2002, it was their first gaming project that involved a brand outside of the Sulake name. It was brought out under the Coca Cola brand and gave competition.

It was often compared to Habbo and the client was named Coke Studios likewise to how Habbo used to be Habbo Hotel. The aim was to create a room virtually which let player's imagination run wild to make the room usable in various ways.

The characters on MyCoke were named 'V-ego' and similar to some hotels powered by Sulake the client for MyCoke was only accessible from 10:00am-02:00am EST. There were other versions available in other countries; the British version operated until 31st July 2006. 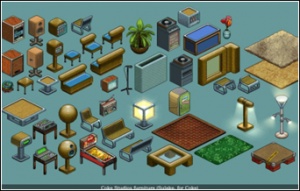 Rooms were available on MyCoke and they were split into two categories, Private Rooms for players to create whatever they wanted and Official Rooms, similar to Public Rooms on Habbo. Private Rooms were created by players and they were allowed a maximum of 12 but this later increased to 20; they could use their own furniture in the room to decorate, this included wallpaper, flooring and a Catalogue with various ranges available. Players had to buy the items they required for their rooms therefore needed to increase their wealth with the currency available on MyCoke. Rights were also available in Private Rooms which allowed players to kick users but also move and rotate furniture. Public Rooms usually resembled real life areas and enabled user to interact with them by playing music, walking, chatting etc. They couldn't place their own items in the room or kick other players. Mainly, the rooms were based on real life cities such as Sydney and London.

*Note that some furniture may be missing

Decibels (or dB) were the currency of MyCoke, first thought of as the original aim was based around music and sound. There were various ways in which players could earn Decibels and mainly they were by drinking virtual Coca-Colas that were found mainly in crates and vending machines, there were 10 available per day and each time players would receive a message saying they had received '10 DB.' At a maximum, 100 Decibels could be earnt per day. Creating accounts were another way in which players earnt Decibels and some campaigns for the site promised 5000 Decibels to new accounts - similar to how Habbo Retros work; sometimes though, the promise wasn't followed through when making an account. Other ways to earn included filling out surveys whereby a maximum of 500 (later decreased to 200) Decibels were available each time and receiving thumbs up votes gave players 10 Decibels each time too.

There were a couple games that you could participate in to earn furniture (What Coke Music would call Rares). Gongs were earned during the Sumo game where you'd wait in a queue to face someone in this rock, paper, scissors sort of game. If you won fifteen times in a row, you would earn yourself a gong.

There was also an activity nearly identical to Habbo Trax. It would net you some decibels and you could vote for other people's songs, giving them a thumbs up. The same mini-game was replicated in Virtual Magic Kingdom (another creation by Sulake).

This was one of the main promotions for Coke Music during the release of the film Shark Tale in October 2004. They held various activities and games that were Shark Tale-themed to earn special furniture in-game. The furniture was valuable and rare and often cited as more popular than Gongs that you could win from the Sumo game.

American Idol joined forces with Coca Cola for a promotion during April 2005 and 2006. This included the release of many mundane rare furniture within the game. Items during this period could be obtained from a code inside the cap of a Coca Cola drink bottle and redeemed in-game for a random item of furniture.

This feature of the film included a promotional cinema screen furniture in-game and poster showing the promotional poster for Batman Begins for June the 15th 2005 release, which also in turn sponsored Kodak Gallery. The normal poster sponsored EA.

In July 2007, they regrettably closed their doors after a huge decrease in the number of players due to frequent glitches and some fradulent activity by users.

Coke Music was instead turned into CC Metro. It was based on There.com, a virtual world that was somewhat popular in the 2000s and which was developed by Makena Technologies. CC Metro was launched in December of 2007, and it only stayed open for three years. Those who earned furniture on Coke Music had their items converted into the currency used on CC Metro. As of 2010, nothing from Coke Music in terms of a virtual world has been announced since.

This is a collection of Images that represent how MyCoke was. It also showcases some Public rooms, promotions and furniture that is not listed above.