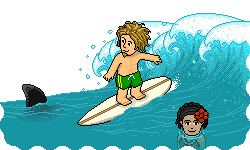 Habbo's a la Playa was a summer event on Habbo.nl in 2008. With this event the Sand Castle furniture was released into the catalogue. Habbo Netherlands gave out Golden BBQs (yellow bbq in Habbo.com) as competition prizes, that makes the Yellow BBQ a super rare on Habbo.nl

Conquer a place on the Playa deluxe floor

Players had to make a beach themed room. The 10 best rooms got a spot on the Playa deluxe floor in the navigator.

For this competition habbo was looking for 15 event organizers. Those 15 habbo's had to organize an activity on the beach. Players had to fill in a form about what they were going to do, the 15 most original, funniest and creative ideas won a golden BBQ

Battle of the Beach houses

This competition could contain more then 1 room.

Players had to create their own luxury beach house complete with swimming pool, bar, bedrooms and off course the beach itself. Teleports could be used to connect the rooms. The 10 most beautiful rooms won a hammock.

After this competition other players could vote for their favorite beach house. The room with the highest score won a signed Habbo trophy, Golden BBQ and a trophy badge. Players could give their scores on the homepage, they could vote 1, 2, 3, 4 or 5 stars on all the winning rooms. However only 1 room could won.