The Unholy Ground is a rare furniture released in October 2007 as part of the Monsters of Habbo campaign. Just like other rares at that time it cost 25 Credits.

It's Motto was: Autumnal chills with each rotation!

The Unholy Ground is the ultimate room decoration item. Rotating the patch reveals a new decoration each time, from rocks to leaves. Stock up now and trade them later!

This is the LAST time EVER the Unholy Ground will be available from the catalogue. 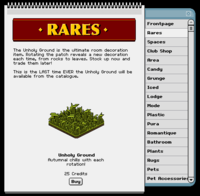 The Unholy Ground released as Rare. click to expand
Retrieved from "https://habboxwiki.com/wiki/index.php?title=Unholy_Ground&oldid=122962"
Categories: