The Resistance was a secret quest that launched in Autumn 2005 on Habbo UK in the lead-up to Habboween. The quest involved Habbos joining a secret clan called 'The Resistance' and investigating several mysteries. This was one of the first events where Habbos could win a permanent badge.

The quest was unique because it was not advertised openly on the Habbo website, nor acknowledged by Habbo staff, spreading only by word of mouth. 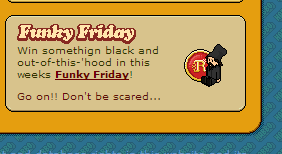 In September 2005, it was announced that the public room known as the Den would be taken out of action in order to be contaminated. No further information was given. Later, Piers, the bot from the Kitchen disappeared. Other bots started turning into an identical bot, namely Dave from The Dirty Duck Pub, and it was announced that a mystery satellite had crashed in the hotel car park. Finally, several references where made to the "Orb of Doom" in the weekly newsletter in the lead up to Halloween, and it was also included in a "Dead Rare Poll" to select which rare to (re-)release. Many of these events were not explained by Habbo Staff, increasing the mystery and intrigue around what was happening.

Later, in October 2005, a secret page was added to the Habbo website, accessible by clicking the image found at the bottom of the homepage, in the box which advertised that week's Funky Friday. The page gave users information about unusual happenings in Habbo and informed them about Dark Piers, the evil twin of Piers. They were given instructions to e-mail Dark Piers and join his clan, the Resistance.

Those who discovered the secret page were later instructed to enter the Habbotics Corporation Laboratory. The laboratory was abandoned and involved various clues dotted around the rooms, including clues in Finnish that had to be translated in order to progress. The laboratory gave users the clues to discover further secret rooms, owned by the Habbo account "Saki.Alhazred". Here, Habbos could obtain the password to the final room of the laboratory, within which were held a series of new rares (various V7 Rares) and a code to be submitted for the chance to win a prize. It was revealed that Habbotics was responsible for the weird occurrences in the hotel as they had been running experiments to make the new rares.

Various prizes were given out during the quest. Those who discovered what had happened to Piers and who joined the Resistance run by Dark Piers were rewarded with a Habboween badge. Those who solved the later quest were said to win 10 thrones, although, due to the secrecy surrounding the competition, it is not known what prizes were given out, and indeed, who won them.