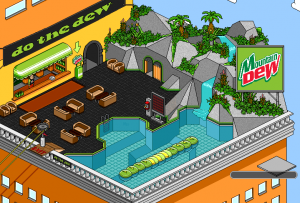 Due to the high levels of Scripting in the early days of Habbo Hotel, the Mountain Dew machine became a staple and iconic mark for scripters conveying that they could transfer promotional items across hotels. Often scripted Photos would produce client side machines for people to dispense Mountain Dew bottles as Hand Items. The ease of using scripting tools to 'generate' a Mountain Dew Machine became an issue during the clamping down and moderation focus on scripting with the banning of many users who were seen drinking Mountain Dew around hotels other than Finland. Mountain Dew clothing was also scripted across other hotels.

Branded furniture was later adapted to what we now know as the HC Sofa, the Habbo Cola Machine and the Habbo Cola Poster as unbranded items for use within hotels. Many Habbo users assumed at the time that the Mountain Dew Machine was created by scripters due to the small amount of furniture present in hotels as many hadn't seen the machine before, which was originally released in Habbo Finland. 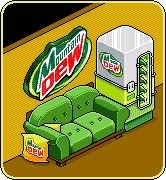 An interview from 2001 with Sulake Staff Paulo from Habbo Finland's programming team outlines the uses of Wobble Squabble and it's creation featuring information on the Mountain Dew campaign room.